skip to main | skip to sidebar

Here is the edited page with the insertions I described in my recent post
Posted by villainousturtle at 2:29 AM No comments:

mine I did all by myself without help from Moses, God, or William Tyndale

1. Don't make stuff up
2. Don't speak from opinion
3. Cite Sources
4. Give links and tags
5. Only make articles that cover notable subjects
6. Do not post pictures that you don't have rights to
7. Use good formatting
8. Do not vandalize the Wikipedia
9. Do not write poorly written and formatted articles
10. Cleanup typos and errors whenever you have time
Posted by villainousturtle at 10:53 AM No comments:

Well, I used to be quite the Wikipedia gnome a few years back, I even made a few of the articles on there and would edit it all the time. Now, I really don't care to edit it, enough other people already do.

Anyway, looking at this page, I know quite about this band...
The things not mentioned in the article are as follows:

On June 20, they performed in Millvale, Pennsylvania. The show was their longest show to date, playing almost thirty songs over nearly 3 hours. During the show, and later confirmed on their website, Deron said that the show was being recorded and taped for a live album which will be their next project after their 4th studio album.

^^^^ This was actually released as an obscure 2 disc set and referred to as a bootleg for copyright reasons but actually distributed by the band directly during meet and greets after their concerts. (I have a signed copy)

On June 20, they performed in Millvale, Pennsylvania. The show was their longest show to date, playing almost thirty songs over nearly 3 hours. During the show, and later confirmed on their website, Deron said that the show was being recorded and taped for a live album which will be their next project after their 4th studio album.
Just 4 days later on June 24, CKY played a show in Burlington, Vermont. This show was cut short when Deron Miller had a meltdown onstage and walked off. On June 28, he posted a statement on the CKY Alliance website citing drug and alcohol problems.[1] CKY have toured North America extensively, as well as most of Europe and Australia.

^^^^Furthermore, the band had a major confrontation as of October, 2007 and has been on hiatus since that time. The members are currently not on speaking terms with one another.
Posted by villainousturtle at 1:15 AM No comments:

I Know It's A Cliche, and I Know We All Know It, But This Is Why You Should Back Up Your Work!!!

We've all heard it a thousand times: "Save your work!"
We all know exactly why this is important.

But I'm sure a lot of us, especially me, don't do it anywhere near as often as we should.

Because I didn't back up my stuff, I learned a lesson in such a hard way that I figured I could make the best of it by using it for a blog, since it took me 16 hours to recover what was lost.

Here's the background on the whole thing...

In 2006, I was in the car with a friend listening to a song, and he said I should make an animated music video to go along with it. I had just been thinking the same thing, and I needed some practice, and doing a video of one of my favorite band's songs seemed like the perfect motivator. So, I e-mailed the band, and this is what they said:

Question:
I am an animator who has worked on some projects at the professional level. I think Tripled Manic State is the best song you've made. I was wondering, if I made a bad ass animated music video of that song, and sent it to you guys, would you maybe use it as the official music video?
asked by See Haus on 10/02/2006

Now I was going to make this video anyway, but what a bonus to have a go ahead from the band!

Anyway, at the time I asked the band the question, I was very busy with school, but I started developing an idea and storyboarding: 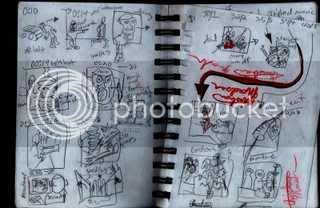 It took me all of 2007 to use my occasional free time to paint the water colored backgrounds: 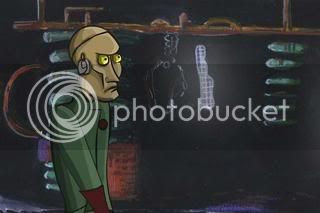 After finally drawing everything, scanning it, and getting a shot sequence edited and set up in Flash, I began animating the movie just after Christmas 2007.
At first, things went fairly quickly and smoothly, with me completing about 2 or three shots a day in my spare time. However, as the story progresses, more characters are added and more action starts happening, so I had slowed down to about 1 shot every 3 days and got lazy and started mixing some regular animation with a technique called Rotoscoping in order to make things go faster.

I have been something of a hermit for the past 2 months, skipping out on doing fun things and sitting on the computer animating. I just really want to get this project done and move on.

With a project this big, backups are ESSENTIAL. There are 250+ megabytes of animation files that I have created for this project, and after one got too big and slow to keep working on, I broke the project into thirds, backed up the 1st part, and kept working on the second. I never was smart enough to back up the second part, and the only archive that was made is what is called an SWF file. Unlike the FLA files one animates inside of, SWF files are essentially set in stone and can't be edited.

After 1 whole week of having not made a SWF archive (which is as simple as hitting command+return, don't ask me WHY I'm so absent minded I forgot to do this) I clicked save. Then, while waiting for this large file to save, I surfed around the internet. Suddenly, the screen went black and I heard a "Clickk...BZZZzzzzzz...." sound. Uh oh! I had that knot in my stomach and just panicked because I knew there was a good chance that I'd done some SEVERE damage. I rushed to get the cord that was hooked into a cheap power strip in the wall plugged back in, turned the computer on, and tried to open the file. The worst thing that could happen had.... "Flash can not open document".

It was possible that an entire month was lost and certain that a week was. Fortunately, after digging around on the computer, I found a week old SWF file, so a month of stuff was somewhat recoverable. I jumped into some forums and asked for some help recovering the data. The conscensus was that I'd just have to reanimate the whole thing. I was sickened. At first I felt like giving up on the whole project, but then realized it'd be best to just boldly hack it out as fast as I could. I spent the day moaning and groaning to friends and family about my nerdy technological woes.

So, I thought why not make the best of this and film a time lapse of me working as well as write a blog for class on it?

Below is the finished result, as well as a timlapse of me recreating what was lost:


As you can see from the above video (Sorry about the spelling in it, I made it at 4 am) it was an enormous amount of work to recreate those two simple clips.
Usually, when something hard and arduous happens like a big test, job interview or really long day of manual labor, once it's over it's done and gone. That feeling of relief you get when you finish a big job, "Ahhhh, I get to go home!" wasn't there for me once I redid this. I still can't get over the fact that all that work had to be done and I'm no further than I was 2 days ago!

When I was a little kid and some piece of art I had made got thrown away, my parents would tell me to just make it again. I never did, because I hate doing the same thing twice, and the second attempt is never as good. So from all this, I've learned a lesson I thought I already knew: Keep your feet away from the power cord to your computer, and always back your stuff up!!


Oh, and one more thing, when I posted that video, I put it up at 4am. The sound didn't work, so I re-uploaded it and went to bed. When I woke up, the sound still didn't work but the video had 1 honor, 1,424 views, 2 comments, 1 rating, and 5 links. I don't know what made it so popular. It has no sound, is boring... and yeah... I have no clue. Hopefully people will find and watch the new one with sound, but that doesn't seem to be happening. Weird that my most boring video is by far my most popular.
Posted by villainousturtle at 11:37 PM 3 comments:

villainousturtle
I like to read obsessively, skateboard, draw, and make animations.